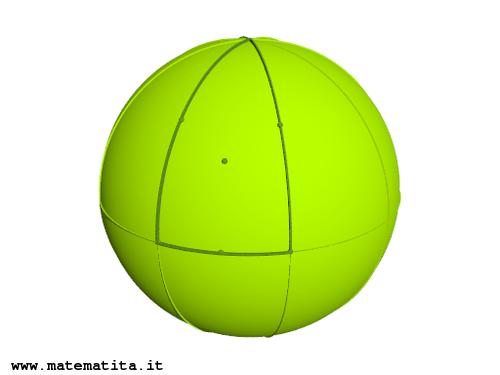 A tiling of the sphere with 16 spherical triangles with angles 45° (= 180°/4), 90°, 90°. The great circles in this tiling are the intersections of the sphere with all the (5) symmetry planes of a prism with square base with center in the center of the sphere. Starting from a sphere with basis a regular n-gone we would get a tiling with 4n triangles with angles 90°, 90° e 180°/n. One of these triangles corresponds to a kaleidoscope where we can reconstruct objects with the same symmetry as a prism with basis a regukar n-gone. The seven points we see in the figure show where we have to place a point-object in the kaleidoscope in order that the points we see are the vertices of a polyhedron such that all its faces are regular polygons: in the center of the spherical triangle we get a (4,4,8) (which would be a (4,4,2n) in the general case) and on two of the three sides we would get a cube (a (4,4,2n) in the general case).
We can also see the other analogue tilings of the sphere.

The image belongs to the sections...:
Other prismal groups (Symmetry)
Coxeter dossier (From "XlaTangente")
Spherical geometry (Other geometries)

Home - Browse the catalog - Other geometries