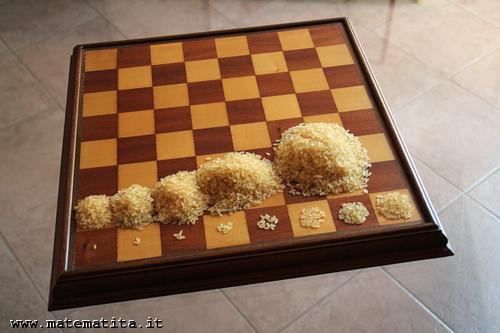 It seems that the inventor of the chess game asked a reward of a bit of rice: just one grain on the first square, two on the second, four on the third one and so on, always making the double...: it is not easy to imagine an exponential growth!
This image has been used in one of the ten maths signposts of the project MIC "Maths in the City", in Bolzano, precisely the one in piazza Parrocchia, near the side door of the "Duomo".

The image belongs to the sections...:
Some images of the maths signposts (Exhibitions with matematita)
Numbers (Numbers)
Playing (Anthology of images)