Two rings of cubes bound up in a hypercube 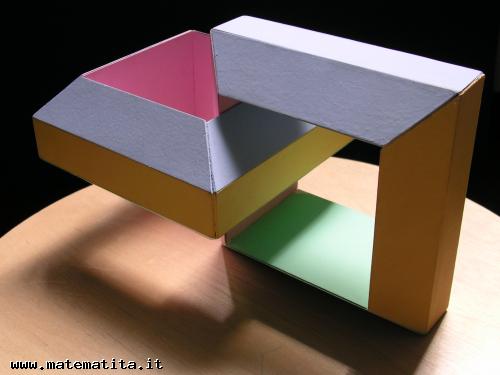 A hypercube (the analogous of a cube in the 4-dimensional space) is made of 8 cubes that can be visualized in a net in the 3-dimensional space. These eight cubes can be subdivided in four couples that form two tied rings. In the three-dimensional representation the cubes appear distorted, as in the two-dimensional representation the square faces of a cube are no longer squares. The colours indicate which faces must be pasted together in the 4D space.
This image appeared in the double number 4-5 of the magazine XlaTangente.

The image belongs to the sections...:
Dossier 4d (From "XlaTangente")
Two tori in a hypercube (4D geometry)